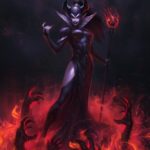 In days long past, the armies of Evil plotted to open a rift to the daemon planes through the torture and sacrifice of a holy guardian angel. However, the angel was resurrected and the rift closed, but not before a daemon general by the name of Morimbuul had come through the aperture. The daemon general, enraged at his entrapment on the prime material plane, threatened to destroy all around him. His summoner, a man named Xerimor, was able to subdue him, and much to the daemon general's fury, forced Morimbuul to instruct him in the daemonic arts. And thus was the class of Apostates born.

The hallmark skill of the Apostate, Apostasy is the art and science of summoning and dealing with the mighty Baalzadeens and lesser daemons. In it, you will learn to use the sentient daeggers, form a relationship with your loving Baalzadeen, and learn to summon a variety of lesser daemons into a pentagram drawn with blood. Perhaps the most feared ability of the Apostasy skill is that which allows your Baalzadeen to tear the soul from an unwilling victim.

Evileye is a skill that is perhaps related to the Curses skill used by the Shamans, albeit perhaps less powerful. With it, one may make eye contact with an opponent and give them the 'evil eye', imposing a wide variety of afflictions upon the opponent. At the high end of the ability, one learns the craft of giving multiple afflictions simultaneously. The syntax for all evil eye abilities, unless stated otherwise, is STARE

Necromancy is the dark art of death magic. At the lower levels, there is an assortment of rather nefarious abilities. Soon though, the ability of Cannibalism is gained, a skill which has inspired wide-spread fear of those practicing Necromancy. Through cannibalism, a Necromancer increases his life essence, which powers the higher abilities. At the very highest level, a Necromancer gains the power to protect his very soul from death.