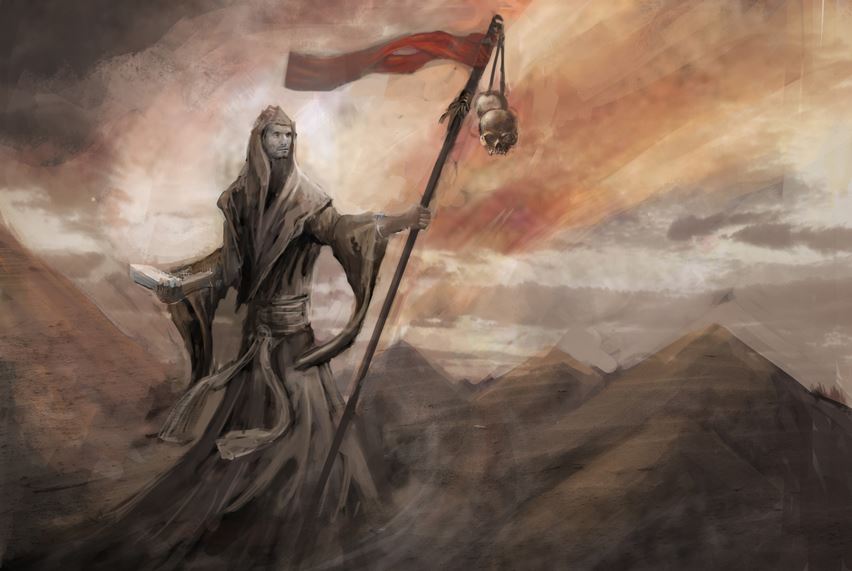 Having cast off compunction and chosen to eschew the everyday legerdemain of court wizards and scholarly mages, the Pariah instead delves into those arts considered too profane or taboo for high society. Only in the solitude of their hallowed crypt can the true mysteries of magic be revealed, the deepest secrets of the sand unveiled. The grave is their domain, the revolting and reviled their companion.

Named Accursed by the eminent Hatun of Ghezavat, the Lost Settlement, the powers of the Pariah were unleashed upon the world in the year 850 by the actions of an unwitting yet opportunistic thief. Most Pariahs begin life as simple Magi, yet all scholars can attest that oft-times the thirst for knowledge exceeds the calibre of one's moral fibre to pursue.

The Pariah suffers no such ethical quandaries in the lifelong - or indeed, deathlong - quest for power.

Having cast off compunction and chosen to eschew the everyday legerdemain of court wizards and scholarly mages, the Pariah instead delves into those arts considered too profane or taboo for high society. Only in the solitude of their hallowed crypt can the true mysteries of magic be revealed, the deepest secrets of the sand unveiled. The grave is their domain, the revolting and reviled their companion.

There are few mediums as potent in the working of sorcery as blood, be it one's own or an enemy's.

The practitioner of Memorium understands and accepts this. Wielding desert-forged blade in one hand and arcane might in the other, the Pariah needs no weapon besides blood and will to see their ends achieved. With sanguine ink and air as canvas, they carve their inevitable decrees into the world, one corpse at a time.

The practitioner of this skill learns to trace the ancient logographs of the desert tribes, each imbued with singular purpose and empowered by the medium through which it is brought to life. The very beating of your foe's heart shall beat the march of their demise, and drop by drop the sands shall drink of their final days.

Be it within the inscrutable confines of the Conclave or the implacable depths of the Underrealm, the halls of crystal harmonies or the workshops of artifice, all sorcerers know a singular truth that need not be put to word: some workings are best left unworked. To take up the study of Charnel is no gift or glory: it is a singular rejection of this truth.

No price too high, no hubris too great. No doom too distant. Such is the burden of the Pariah and such is their eternal fate once they step onto the path of damnation. Dwelling in their black sanctums beneath the desert sands, these reborn sorcerers dabble in the very substance of mortality, and pay the price not with mana or madness but with their eternal souls and the wounds carved therein.

Woe to he who reads the tablet of interment, and woe to he who does not flee: for life entombed in ensorcelled stone is their Accursed reward and an eternity to weep.

The practitioner of Pestilence is armed where ever they may walk, for their weapons are not of steel or bronze but of chitin and plague. In the darkness the chittering nightmares wait, enthralled to the will of their benefactor. When the skies turn black and the myriad eyes open, one thing can be certain: it is time to feast and there is enough for all.

The sorcerer who raises swarms to do their bidding may wield them in many ways. Be it simply sending them to sting their enemies or blot out the sky, drown their enemies on dry land or feast from within, one thing can be certain: the Pariah's fist is manifold, and it will fall on countless wings.